Between Heaven and Earth: the Human Being

Chinese medical theory is based  strongly on a relationship between the natural world and the human body.  An understanding of health and illness is achieved by observing patterns in nature, both generative and destructive. Wind storms ripping apart  trees or turning into funnel clouds, versus the ebb and flow of oceanic tides all inform the metaphorical understanding of human health and illness. 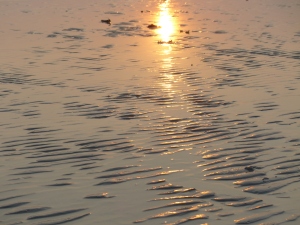 When you look at the flow of the acupuncture pathways, called meridians, this flow from heaven to earth, and earth to heaven becomes apparent. Our bodies are thought to take in energy from the heavens with each breath, literally breathing in the heavenly qi or air into our lungs, and to receive nourishment or pull up energy through our feet from the earth.

The classical stance that best represents the acupuncture meridians is drawn with a human standing legs hip width apart stable on the ground. The arms are lifted parallel from each other straight up to the sky with the palms facing each other.

This relationship of the human body being the entity that sits between heaven and earth, and allows a mixing of the two different energies is one that I like to ponder.